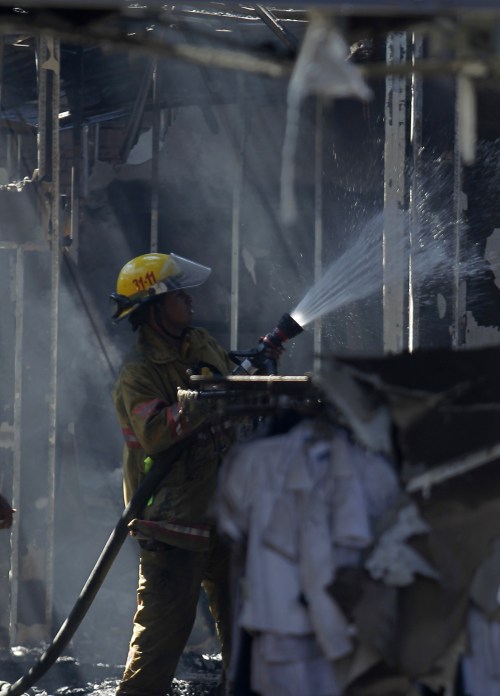 This morning at 1.00 am, the fire brigade…the Bomberos….were called to a hotel fire in the centre of our little town.
The hotel was on the second floor….over a newly refurbished shop.
It was built of wood…sixty years old and tinder dry.

The cause of the fire is presumed to be defective electrical wiring, though both the fire brigade and the equivalent of the CID…the OIJ….are checking all possibilities.
After all, only a week ago, an exploding gas cylinder killed five people and injured many more in a little caff in San Jose.

Nomatter how brave the firemen nor how well equipped, a building going up like a torch does not offer much possibility of rescue for those inside…asleep….but the firemen managed to get two men out, one with 50% burns, the other with 30%, and have them sent to the San Juan de Dios hospital in the capital.

For five other men there was no chance….four died in their beds…one trying to get down the stairway. One can only hope that they were asphyxiated by smoke…the other possibilities do not bear thinking about.

All hope gone for the hotel, the firemen spent hours trying to limit damage to surrounding businesses…with some success. Old wood is old wood.

People knew the men who died or were injured: even I…newcomer…knew two of them to nod to and a whole community is mourning them.

But that might be one reason why they died…why two men are in appalling pain in hospital.

For this hotel had been closed down by the Health Ministry.

On inspection last year the electrical wiring had been found to be faulty and the fire extinguishers empty. The owner had been given a period of time to make things good.
A second inspection showed that the owner had done nothing and the hotel had been ordered to close by the end of December.

But it was still open for business….

Because the owner belongs to one of the ‘big’ families of the town….and in a town where everyone knows everyone else and everyone knows their place who is going to enforce the order from the Health Ministry?
Not the Mayor…not the police force….
So unless the Ministry enforces its own orders nothing will be done.

And nothing was done.

And five men have died.

53 thoughts on “When small is not beautiful”