Having been somewhat under the weather recently I have taken to resting in the afternoons and, thunderstorms permitting, listening to BBC radio via my laptop.

Thanks to the time difference the Test Match coverage is over by lunchtime, so the whole range of the iPlayer is open to me….but I’ve been disappointed much of the time by the standard of what is on offer.
Perhaps I wouldn’t be so tetchy were I on top form, but it’s because I’m not on top form that I want to listen to something stimulating and informative.

Still, given that the bumbrushers to big business now running Britain want to reduce the BBC to a muppet show I suppose I had best make the most of what there is while it lasts.

Music – the alternative to the spoken voice – is somewhat curtailed since the arrival of the pups.
They have objections to counter tenors so Purcell’s ‘Sound the Trumpet’ is out…

The singer’s lips may not have the courage to utter, but the pups have no such inhibitions. Heads flung back they give it laldy with both barrels.

However they have no such objections to the song derived from the above; ‘Silent Worship’….

Unfortunately I do…much though I enjoy Thomas Allen’s voice I find the lyrics syrupy, so for now on the music front it is pups 15, me love.

What has astonished me is to find re runs of programmes I remember from way back….in ‘The Navy Lark’ Sub-Lieutenant Phillips is still to be found navigating HMS Troutbridge with his unique command of ‘Left hand down a bit’ which results inevitably in an unwanted encounter between several tons of moving warship and several more tons of immovable jetty to cries of ‘Everybody down!’ from the conniving Chief Petty Officer Pertwee to be followed by the wrath of ‘Old Thunderguts’ – Captain Povey.

A period piece now – Britain still had a navy when that series went out after all – and far from ‘edgy’, it is still a delight of comic timing and shines like a jewel among the clumping ‘comedies’ of the current era – as does the superb later series of ‘Absolute Power’ with its commentary on the backstairs of the Blair years.

But, joy of joys, they are broadcasting ‘Round the Horne’ again.
This had my parents in stitches when first broadcast and listening to it now it astounds me that the scriptwriters got away with it in an era when prudery ruled the airwaves.
Especially when you consider that it was broadcast on Sunday afternoons.

A lesson in how what you read into something defines yourself.

‘Gardener’s Question Time’ is still going strong, though the egregious Bob Flowerdew has long replaced the gentleman who prefaced all replies to queries with the statement that ‘the answer lies in the soil’, but one old favourite not so far repeated is ‘Down Your Way’ a programme which visited towns and villages across England interviewing local residents.
While my father refused to listen to it, denouncing it as a load of claptrap from town clerks and town bores I found it interesting. In an age where we did not travel much it was an insight into how others lived and worked….and in that pre Thatcher era there were still trades and industries to be described!

‘Down Your Way’ came to mind when I was reading an item in the local on line news: a gentleman has been giving a series of reminiscences of his youth in the sixties and locates the shops bars and dance halls he knew, together with the names of the adults and children of his time….with Violetta’s help I can place most of the shops he talks about – and found too that one of the kids with whom he ran about seeking tips outside the bars is my lawyer!

This sort of thing, oral history, brings the town to life for me….in the same way that the books of George Ewart Evans – ‘Ask the Fellows who Cut the Hay’ and ‘Where Beards Wag All’ to name but two bring alive the life of the East Anglian farmhand from a century previous.
Those who wish to be superior decry what they call ‘anecdotal evidence’…but it is the very life of history.

So, what anecdotal evidence has been happening down my way recently?

Well, things are winding up for next year’s municipal elections so the current bunch of gross incompetents are counting on the short memory effect by a bout of sudden activity.

The alcalde (mayor) has been out and about drumming up grants from state institutions to pay for the obligatory study which has to be made before works can be done to repair or replace the many bridges either down or in a dangerous state during the length of his administration.

By the time he has the grants he reckons he will be back in power for another few years and the bridges can be forgotten until next time.

This is unlikely to gain him many votes among the indigenous community at Zapaton whose road exit has not been repaired since the great washout of a year ago, leaving many elderly people prisoners in their houses.

Mark you, he may not even be put up as his party’s candidate as well founded rumour has it that among the four up for the job is one who will be in the toils of the courts in short order, so painting the podium in the park in his party’s colours may not pay off after all.

Still, he may yet be of service to the community…

Following the travails of the municipal bulldozer, the municipal dustcart has been out of action for some time…perhaps the added weight of the alcalde will encourage its compaction unit to work as it should.
Well worth a try.

And we have had visitors. 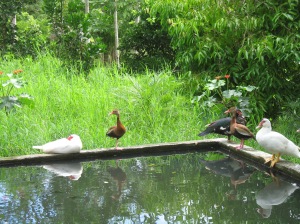 A pair of black bellied whistling ducks.
They have been feeding with our lot for a few days now, so I’m in hopes that they will stay.
Unlike the alcalde.

The Greek people have voted not to accept the continuation of the economic slavery that their previous governments, willing and well paid tools of the international banks, had imposed upon them.

In the western world we look to classical Greece as the source of our democracy….as an example of resistance to tyranny…. however little the theory reflects the reality.

We might even remember, if of a certain age, the betrayal of the Greek resistance by the western powers after World War II…

The rule of the Colonels….

In the era of the European union we remember too how the then rulers of Greece took advice from the international banking firm Goldman Sachs on how to fiddle the figures in order to be accepted into an organisation only too pleased to turn a blind eye to the obvious in the pursuit of a geo-political goal.

How – in compliance with NATO requirements – Greece was obliged to buy arms…notably submarines from Germany – for high prices when the bribes to Greek politicians are included.

How EU banks bought control of Greek banks – offering loans at rates of interest well above those prevailing in their home countries.

The new government had a mandate to prevent the ruin of Greek society….it has not been the sharpest knife in the drawer when it comes to dealing with the case hardened vultures of the IMF and the Eurozone, but this result shows that it has the backing of the majority of the Greeks most affected by previous obligatory compliance with EU rules by smaller states…larger ones, particularly France, seeming to have to have immunity.

But the Greek people have been given the chance to speak…and have spoken.

Their future will not be rosy…but they have risen against repression.

I hope that they will let us know how we can best support them.