You’ve collapsed into a chair on the terrace of an establishment where you order coffee and a pastry.
Your order arrives: the pastry was clearly aptly named being strong on the paste and light on the filling.
The coffee appears to have been made from ground chicory roots seasoned with a suggestion of Robusta beans roast to a cinder.
You understand why the guidebooks recommend that you take a pastry with your coffee when in France….the unadulterated liquid would hit your stomach like a dose of nitric acid and have you convulsed on the floor in seconds, posing an obstacle to the safe passage of waiters.

To cap it all, the price is astronomical, but you console yourself with the notion that you are, after all, on holiday and can afford some of life’s little indulgences, while hoping to goodness that you’d packed the Alka Seltzer.

Then, inevitably, someone needs to go to the loo.
Usually mother.
She departs, only to return at speed to declare that the state of the conveniences resembles old Tangier in time of plague and, with a suspicious look at the crockery, that your cup seems to have a crack in it.
The bags are gathered and your party departs.

But mother still needs to skip to the loo.

You spot one of the Tardis installations on the corner. A sanisette. 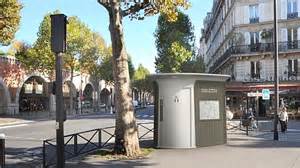 These are self cleaning loos….and some, to gladden a Scots heart, are even free.
The paying ones gladden a Scots heart even further….yes, you have to pay, but when your sixteen mates slip in as you open the door to come out they get a free shower as the cabinet cleans itself. Thoroughly.
Just the thing after a celebration of victory on the rugby field…who am I trying to kid…

Mother has seen one of these before and regards it with deep suspicion but as the only other alternative is another high risk coffee she resigns herself to the worst and enters.

But these days are over for the highspots of Paris…and in the mainline stations.
There is an alternative to using a public loo….in fact, a whole new concept!

You can use a ‘2theloo’ restroom.

Rather like the old Marks and Spencer advert…this is not any loo, it is a ‘2theloo’!

According to the company’s blurb, these offer an entirely new concept of….going to the loo.

For a start, the usage is – almost – free.
You buy a ticket…and receive an immediate discount on the price of the goods in their online shop….which sells everything…. toilet.
You can buy this combined loo roll holder and magazine rack for only fifty five euros, though you’d need a serious bowel complaint for the ‘discount’ to be worth having there…: 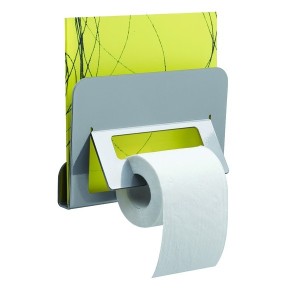 Or – for those commuters who harbour unlovely thoughts of the ’emmerdant’ suburban Paris metro system – this: 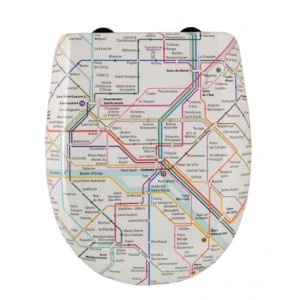 And even this….don’t worry, you don’t have to take it away with you:

The service is claimed to be more like a home experience: for example you can pay a supplement to use a Japanese superloo.
Now, this might bear out the ‘home’ nature of the experience as I reckon I’d need an hour with the instruction book before approaching the thing without a suit of armour and a sharp stick.
In the somewhat hurried circumstances associated with using a public convenience I suspect that the thing would blow me sky high on a blast of hot air worthy of a politician at election time before I’d finished fiddling with my faulds.

Their loos are not only clean…but soundproof.
Perhaps this is to reassure those who run the taps while having a pee. but I’m not sure that that is an advantage. At least those trapped in a Tardis can bang on the walls and shout for rescue.
The fate of the three old ladies comes forcibly to mind.

But ‘2theloo’ have thought of that.

Not the traditional gorgon with her saucer of small coins and barbed wire entanglements surrounding her stash of loo paper…no, someone who can speak a couple of languages – to explain the Japanese kamikaze machine perhaps; someone who can sell things like the items pictured above to desperate punters whose mind is on other more urgent matters.

And this is where I would urge you, should you be thinking of visiting Paris, to skip ‘2the loo’.
Skip…as in don’t use their facilities.

Because ‘2theloo’ has taken a contract to operate these restrooms with the Ville de Paris (City council).
It succeeds another private operator, which was delegated by the Ville de Paris to run the loos.
That operator continued to employ the ladies who were previously employed by the council – at equivalent, though hardly munificent, rates of pay.

2theloo, holding a straight contract rather than a delegation, has refused to take the ladies with the loos.
The company spokesman has said that the company would be willing to interview the ladies for any positions vacant – though without respect to their pay and seniority – but doubts that they would fulfill the company’s requirements.

The ladies would, it was felt, be too stuck in their ways to accept the company’s way of working…too independent…not experienced in sales techniques.

And anyway, claims the company, they are not running loos…they are offering a concept… so there is a clear break which justifies them in not continuing to employ the ladies.

They tried this when they opened restrooms in the mainline Paris stations, but without success. SNCF – French railways – insisted on continuity of employment and its ladies are still in place. From what I remember of those ladies in my time if they tell you that you want to buy a thousand euro Japanese toilet…then that’s what you’ll be buying if you want to escape with your life, so the company could be making a big mistake in trying to get rid of them.

But the Ville de Paris is doing nothing to support its loyal workforce who face a miserable future, even if they win their claim in the Prud’hommes (the labour claims court): no big union is marching in protest…they are just ordinary ladies whose security has been torn from them by some smart alek set up who intend to make a fortune from human necessity.

The Emperor Vespasian, who set up the first public loos in Rome in the first century A.D,.was reproached as having bad taste in taxing the collection of urine as a source of ammonia to be used in tanning leather.
His response?
Pecunia non olet. Money doesn’t stink.

In this case, it does.

So, please: if you visit Paris…
Skip ‘2theloo’.

And now, just for fun and very little to do with the above, here’s Georges Brassens’ homage to his ladyfriend, the ’emmerderesse’.
Lyrics in French and English here.