I have just returned from an unexpected trip to England and blearily reviewing it a day after my return the images that remain have been those of the flowers that bloom in the spring.

When I left, the trees were blossoming here.

On arrival in England the roadsides were covered in gorse in full flower – though its coconut scent was dulled by the chill – while  swathes of Spanish bluebells were taking over  from  tulips in the suburban gardens. Trees displayed that freshness of leaf undulled by the summer heat to come, the structure of their branches still visible under the sheen of green and, to my surprise, the horse chestnuts were coming into flower in the London parks where clouds of blossom were cast into relief against the Cambridge blue skies. 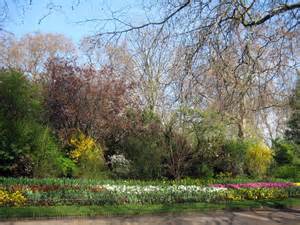 I remembered then Browning’s ‘Home Thoughts from Abroad’..

There spoke the exile in his Florentine retreat – though goodness only knows what he found to be gaudy in the flower of the melon, that most unpromising  harbinger of sweet delight.

I was happy to see England in the springtime again, but cannot feel the regrets of an exile. I was privileged to have grown up with it, to have known it, shall never forget it, but cannot say that I hanker for it, any more than I hanker for England itself.

There were other flowers in evidence during my trip: those laid by people in memory of the policeman murdered at the gates to the Houses of Parliament.

Poor devil: he died, as have so many of his colleagues before, at the hands of a deranged person while doing his duty – in his case, guarding an entrance whose gates had to be left open to permit ministers to be driven to the Commons in time to cast their votes in a division.

Perish the thought that a minister should wait for an instant at a gate closed in the interests of the security of all those working in the Palace of Westminster.

They might be shot at if kept waiting? Good. The world would be a safer place if ministers were forbidden to have protection. Might give them pause for thought before putting the rest of us in peril and I suspect that – to paraphrase another song from ‘The Mikado’ – they’d none of them be missed.

In the aftermath of P.C. Palmer’s death we had the politicians braying that ‘terrorism’ had not succeeded in bringing down British democracy….

Of course terrorism hadn’t brought it down: the same politicians and their ilk had already done for it with their slavish adherence to the dogma of ‘public bad, private good’ when it came to principles of government, with the gerrymanderings of the Boundaries Commission, with their interests (paying) outside the House.

Such a parcel of rogues in a nation.

Currently, like Ko-Ko in the second verse, there are plenty of people whose attitude to the flowers that bloom in the spring is to say that they have nothing to do with the case.

The Prime Minister has called a snap election, putting her trust in the British media to depict her as a female Moses who will bring her country to the promised land…..the land promised to private enterprise, where access to health care and education will depend on the ability to pay for it; where those thrown out of work will be demonised; where those too ill to seek work will be driven to suicide.

Given her proven ability to change tack while at the Home Office I imagine that once she has gained victory the new Moses will reveal herself to be Aaron, presenting the golden calf  for public worship.

I cannot fathom people….more and more of them are living with the effects of unemployment and the resulting lack of tax revenues to fund proper services and yet the turkeys still vote for Christmas at the bidding of the butcher.

Flowers in France too, for the policeman killed on the Champs Elysees as the country goes to the polls in round one of the Presidential election.

The outgoing President Penguin congratulates himself on his record…yes, well done, thou good and faithful servant of thyself. As first secretary of the Socialist Party you sabotaged the campaign of that party’s candidate (and the mother of four of your kids), Segolene Royale, to gain the presidency and now as President you have sabotaged your entire party and given your support to the bankers’ candidate, Macron, whose chief claim to expertise in economic management seems to lie in having transformed the millions he made while working at Rothschilds bank into wallpaper for his flat.

Panic in the dovecotes at the thought of Marine Le Pen gaining power or, probably worse for the powers that be, Jean-Luc Melenchon  who said of the press reaction to his growing presence in the polls:

“Once again, they are announcing that my election win will set off a nuclear winter, a plague of frogs, Red Army tanks and a landing of Venezuelans,”

Roughly the sort of thing that the British press says about Jeremy Corbyn.

One thing is sure…if the British vote for May and the French for Macron then both countries can forget the years of social justice…..the golden calf will be a full sized Minotaur before they can blink and the hopes of themselves and their children will feed its maw.

Thoroughly depressed I set off on my return….U.K. to Costa Rica via the Netherlands and Canada. Yes, I know….but Scots blood will out: the fare was less than half that of the direct flight.

A change of flight time at the last minute left me with an overnight at Amsterdam Schipol, guarding my luggage like a broody hen its egg as the check in would not open until morning.

It was a salutary reminder of how nice people are: a young woman offered me one of her biscuits and accepted a cucumber sandwich in return; an armed policeman looked after our bags while we went to the loo and the gentleman at the coffee stall brought our drinks over to us to save us  from moving our mound of cases.

And then the flowers that bloom in the spring reappeared. As the dawn broke, the tulips in the tubs outside the Departure area began to glow with what looked like an internal light…strange, other worldly and utterly beautiful.

A good note on which to leave Europe….a reminder that while all seems dark there is yet hope.

And to greet me on my return….sitting on my desk….this little orchid. A true welcome home.

37 thoughts on “The Flowers That Bloom in the Spring, Tra La..”