My computer will not open the website I wish to consult.

Investigation of the bowels of the thing reveals – eventually – that the Windows firewall will not allow anything to pass it.

I mess about with the tolerance levels of the Windows firewall. It appears that those levels resemble the attitude of the Rev. Ian Paisley to mention of the Pope.

And just like the Rev. Ian, the Windows firewall has no intention of changing its views.

Eventually I turn off the computer and take to strong waters.

The next day the computer will allow access. Clearly the Windows firewall has not the  staying power of the Rev. Ian.

Probably lacking the moral support of a piss and vinegar band accompanied by the lambeg.

Technology, in respect of the internet, is a wonderful thing. If only firms like Microsoft would not keep hiring people to bugger it up for those of us who buy a computer with the idea of being able to communicate….to learn…to switch the wretched thing on to access the world rather than to learn that Windows is configuring it – at length.

You switch off at night.

No…Windows is configuring….you have to sit up or trust the brute not to stall.

You switch on in the morning…

Would you believe it? Windows is still messing about with the computer’s innards like an incompetent surgeon in search of a missing swab.

So while you wait you think you will check Facebook on your mobile ‘phone.

Fat chance. The blasted thing wants to download an upgrade – echoes of the Grand Old Duke of York – but on having agreed to its request it will smugly tell you that you do not have enough space in what is laughingly called the memory and you must then abandon other sites such as Kindle in order to make space for it.

Between being able to read books I have chosen and a screenful of ads which bear no relation to my interests there is no contest.

How Facebook believes that I wish to know fifteen methods of cleaning my oven without using harmful chemicals is beyond me, but whoever devised that algorithm has his airse oot the windae.

Come to that I can live without those who post that they are feeling down, wait for fifteen concerned souls to respond in terms of increasing anxiety and then say that they will reply by pm.

Quite right the yoga mats! It is indeed, which does not make it any less of a problem, indicative as it is of a society where companies believe and act as though those who buy their products are supplicants before their altars rather than the foundation of their fortunes.

Mark you, I am beginning to believe that companies produce items as a sort of front for their real activities, such as buying up their own shares to boost the price on the stock market which in turn increases the value of the options held by their directors who all appoint one another in a game of musical chairs in which chairs are added rather than removed and a golden parachute takes them from one set of chairs to another when their incompetence becomes notorious even in their own ranks.

Incompetence used to be regarded as a Third World problem…’If only they knew how to manage things better…’ but is fast becoming the mark of the First World.

To work out the price of a ticket from London to Milton Keynes requires an Enigma machine while the French railway company, SNCF, managed to advertise cheap  tickets to be sold ‘at dawn’ which, had they ever existed, had vanished long before Bright Phoebe rose above the horizon to the chagrin of all those who had set their alarm clocks in order to take advantage of the offer.

U.K. embassies no longer issue passports….banks can’t tell their arse from their elbow when it comes to security…websites go in loops…

When I was first blogging about Costa Rica and about its capital, San Jose, in particular, a blogging friend advised  me to make the most of that grubby, shambolic place while I could. Soon, she said, it would all be pavement cafes and carriage trips round the sights.

She was right. The carriage rides have not yet arrived – the horses would have to wear gas masks such is the level of pollution from buses and cars which have presumably passed the annual M.O.T. test  – but pavement cafes are beginning to be with us as are, of course, cycle paths. Two are planned but only one is as yet in use. In an exercise in fatuity it runs down the middle of a pedestrianised boulevard where the lycra clad unco’ guid can enjoy themselves by making those on foot hop out of the way…two wheels good, two feet bad.

We have gastronomic festivals, self conscious fusion cuisine…food trucks…and bars where black shirted men with buns perform solemn rites over coffee machines. I would not say that these high priests exact a tithe, but  couple of coffees can soon make a hole in the shopping money.

Art deco and art noveau buildings have been tarted up…a stunning new museum of jade has been opened….the streets are clean….the homeless have been shifted from the centre….but still the tourists do not come.

Not surprisingly…for years the guidebooks have been directing tourists to the beaches, the rain forests and the ruinously expensive eco lodges run by exploitative hippies…not to speak of yoga retreats ditto.

Visitors are advised to eschew San Jose…unless they are men in search of paid female company in which case they are directed to hotels which call themselves gentlemen’s clubs and to the casinos and bars of Gringo Gulch where practitioners of the art of wallet extraction lurk in search of their prey.

Otherwise the tourists visit San Jose only to get the first bus out to their destination…so something, it seems, must be done to keep some of their money for the capital.

First bright idea…move the artisans’ market from its perfect spot under the National Museum in the centre of the city  to a concrete box several blocks away in an street which has nothing to attract any tourist whatsoever, unless they are admirers of the concrete brutalist style of architecture which inspired the building housing the offices of the CAJA – the national health service – which looms over the surrounding area.

So far this has not worked as the President is firmly in favour of the market remaining where it is, instead of being replaced by further parking for a bloated ‘charitable foundation’ alongside. He does not have the law on his side…but he has prestige. However the mayor of San Jose can wait…the presidential elections are coming and the next incumbent may favour the bloated ‘foundation’.

So, in the meantime, attention has turned to the other markets…the Central…the Borbon and Coca Cola.

The Central has a bit of everything, from flowers to fish via meat, cheese, spices, medicinal herbs and caffs galore….

The Borbon has butchers and fishmongers, but its main role is selling wholesale and retail veg and fruit…. 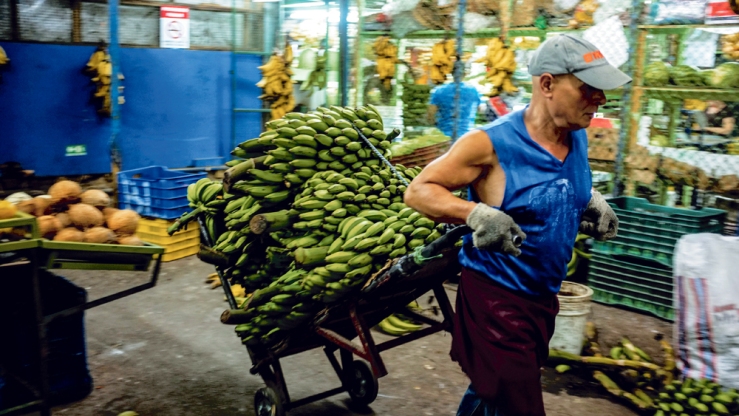 Coca Cola specialises in hardware and electrical supplies…though, of course, having greengrocers and suchlike….. and it is one of the busiest bus stations in San Jose, whence the tourists fresh from the airport leg it to the beaches of the Pacific coast.

While the Central is regarded with favour by all, the other two have a dubious reputation…pickpockets at every turn and babies barbecued to order.

Absolute nonsense, of course. I would not frequent either at night…but I could say the same of many other areas in many other cities.

The only time my purse was stolen was in a Chinese owned supermarket by the Central. It was returned to me by the ‘regulars’ who sell sunglasses, watches and TV remote controls on the benches nearby.

‘Sorry, senora…not one of ours…a bloody African! We saw him lift it and we stopped him. Not having these illegal immigrants giving us a bad name.

Did you report it to the police?

Are you joking! As if they could give a damn…too busy chasing poor buggers selling veg without a licence!

I just wonder if, with the new vision for the markets, these gentlemen will be driven off as have all but the most intrepid of the street traders …if so, a great part of the pleasure of shopping will have gone with them.

These are working markets….the idea of the Borbon offering organic veg and ‘gourmet’ items is enough to make the blood run cold.

And who will be paying for the ‘improvements’?

What will happen to my hairdresser… 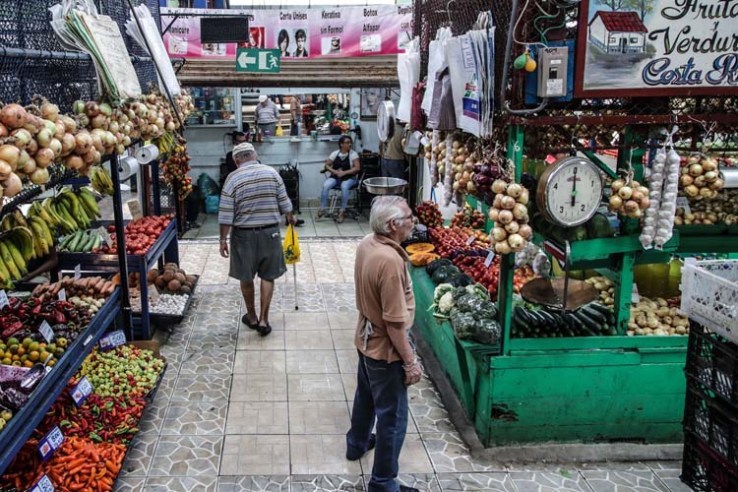 Who does me a cut for two thousand colones which equals that for which the Italian artist of Kensal Rise charges me thirty seven quid. She has been here for years, since the hotel which housed her salon closed down, as has the gentleman on the right, at whose stall I buy my ginger and garlic.

And what about our favourite caff? 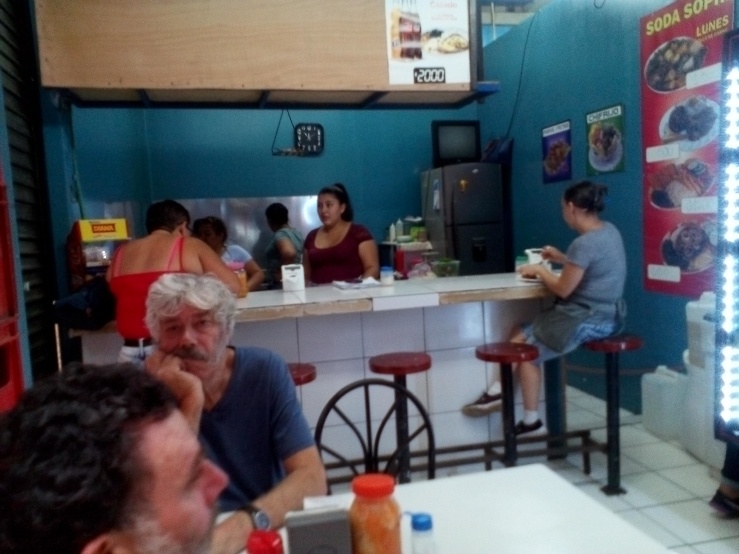 It will be struggle for them to keep going if their rent goes up.

And what of Coca Cola?

The idea is to put a roof over the area between the bus station and the market, with smart caffs lining the area….to attract the tourists before they mess off to the coast.

Have they no idea?

How better to trap the fumes than by throwing a roof over the whole area….

And haven’t they noticed? The whole place is full of caffs…offering comida tipica – local food. Or isn’t that good enough for tourists…

Furthermore, the streets linking the markets are to be lined with trees.

It isn’t gentrification…were it to be artists and ‘creatives’ would have been given space to spread themselves, as they have in barrios in the east of the city. Where they tread developers follow and the original inhabitants are driven out to the suburbs.

I do ask myself who subsidises these creative leeches on society…but that is another question for another day.

Why am I so upset by the proposed changes?

Because while the man who sells vinyl discs is lauded and will figure on the tourist trail  the men who run the goods between the lorries and the stalls, the stallholders themselves, risk being priced out of the place…

As a tourist I prefer to see the markets which local people use…as an example there is a tourist market in Masaya in Nicaragua…very sanitised and tranquil. 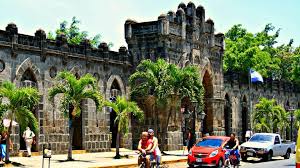 Also in Masaya is the local market just up the street…where you can find all you wish and more for half the price under its corrugated iron roofs.

In the former, if you want a hammock, you can choose one which they have for sale…in the latter, if you don’t see just what you want a runner will take you to the hammock makers’ street down by the lake.

I know which market I prefer and it is not one where the only traders to be found are the ones who can afford the organic produce certification process.

I prefer one where the man at the veg stall tells you that you can see he doesn’t use chemicals by the bugs in his lettuces.