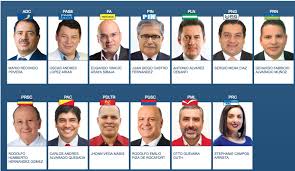 On Sunday people will be voting to send deputies to the National Assembly and electing a President.

There is plenty of choice…thirteen candidates….and no real way of knowing how people will vote on the day.  The polls show that an increasing number of those who intend to vote are not at all sure for whom to vote…..though there is a suspicion that those who intend to vote Liberation are afraid to say so, linked as that party is to institutionalised corruption, but will vote green and white, the party colours, once in the privacy of the booth.

Liberation’s candidate, despite being a front man for the Oscar Arias tendency – think mining concessions in protected areas – claims to be ‘a man of the people’. Well, given that his family let out offices to government institutions on the grand scale I suppose he is a man of the people who let out tower blocks…

The defeated Liberation candidate, an ex President who thought it wise to sit things out in Switzerland for several years after his term of office ended, obviously felt sour as he has been financing a noisy demagogue from a tiny party made up for the elections who wants to rule with a firm hand and is notable for announcing that female judges could only get advancement by giving senior male judges oral sex.

An indignant retort from senior female judges rebutted his claim but, as has been noted, only in respect of oral sex….no all embracing rebuttal has been forthcoming.

Then we have the evangelical whose wife speaks in tongues…the video on Facebook has been removed but not before it had gone viral…and a horde of more mainstream candidates.

The local internet groups have been infested by paid ads from those wishing to represent local people in the National Assembly…an ex mayor proclaims that it is time for a native son to represent the canton, forgetting that people have far from fond memories of his mismanagement of its affairs when in power.

What has he done for the canton? Filled in the holes in the athletic track, apparently. So that’s where all our taxes went…

Another bright spark is using the slogan which brought the retiring President to power  – despite representing a rival party – in the hope that people will think it is more of the same….

And the omnipresent candidate for Liberation is promising water for all.

Water is a sore subject here. Thanks to dire mismanagement and neglect there is a water shortage, incredible as it may seem in an area alive with springs and rivers. So we have been treated to photographs of said candidate standing in front of waterfalls and crouching in front of water tanks…when asked on a ‘phone in exactly how he intended to provide water for all he said he would have to study the question with the Water Board, the very people responsible for the mess up….

But people here have other things on their minds…that public nuisance The Neighbour, he of the crisp white hat with the curly brim, has surfaced again.

He had been quiet, not to speak of invisible, for quite some time, given his problems with the various local Mr. Bigs  after losing their money in a casino, but he has emerged to public view once more…on the arm of a lady in her thirties who had consented to marry him.

To general astonishment as she is

A, half his age and

B, generally held to be in possession of her senses.

He had been seen a couple of times, driving round the Three Valleys in her company, but he had installed himself in her comfortable house on the other side of the town while waiting for the ceremony, following which, totally pie eyed and full of himself, he brought her on another tour to introduce her to those who were still on speaking terms with him.

A distinct failure of judgement on his part as she thus learned that the farms he had pointed out to her as being his were, in fact, those of the people whom they were visiting…

It is possible that the atmosphere had chilled somewhat after that, but The Neighbour, of course, had to excel himself.

A couple of days later he was eating the dinner she had prepared when he took a telephone call on his mobile from one of his barfly friends.

Yes, he bawled, he was set up for life now! It was like  having a free pass to a brothel with the food thrown in….

The food might have been thrown in, but The Neighbour was thrown out, on the spot, on his ear and his possessions thrown after him.

The lady is breathing fire and loaded for bear.

Much more exciting than some bald bugger crouching in front of a water tank…!

36 thoughts on “Election Fever and Marriage a la Mode”