As you may be aware, Nicaragua is undergoing social upheaval.

Thirty dead, many more injured and damage to property in the main centres of population.

President Ortega announced that to resolve the deficit in the social security budget an increase in the contributions of both workers and employers was required, coupled with a five per cent cut in pensions.

The upshot was a howl of fury bringing people out onto the streets in protest, only to be met by young party thugs and riot police.

For many, the pensions cuts were the last straw in a process which has disenchanted them with President Ortega, his wife – and Vice President – Rosaria Murillo and the tripartite oligarchy of the Catholic church, big business and the Sandinista party which has ruled Nicaragua since 2006.

The Sandinistas – and President Ortega – are now a far cry from the movement which overthrew the dictatorship of the Samoza family in 1979. Then its black and red flags were the symbol of hope…hope for a better life for the ordinary family in a country whose assets had been stripped to the bone.

Unfortunately the first task of the new government was to beat off attacks by the right wing ‘Contras’, based in Honduras and, lamentably, Costa Rica. A guerilla war of unequal forces, which eventually came to an end in 1989, and which slowed down the hoped for advances, despite a reduction in the illiteracy rate from fifty per cent to 13 percent in just a few months, resulting in a business led government being elected in 1990 and a return to the misuse of public assets while cutting spending on education and health and trying to reverse the Sandinista land reform which gave property rights to the rural poor.

The Sandinistos lost election after election until Ortega came to an agreement with the third business led government. They would change the constitution to allow a candidate with more than 35% of the vote to be elected on the first round. In return, the incoming Sandanistas would not prosecute members of the outgoing government for corruption.

Ortega returned to power backed by the Catholic church and the business sector….and the black and red of the Sandanistas become the blue on pink of the new regime….increasingly controlled by his wife….which has become increasingly authoritarian – and corrupt.

Rosario Murillo seems to be following in the footsteps of Grace Mugabe and Winnie Mandela…though instead of the latter’s ‘Football Club’ she has the Juventad Sandinista…gangs of young thugs who attack and intimidate any opposition and who were much in evidence over the days of violence that have shaken the country.

Murillo peddles a type of New Age spiritualism with a dash of Christianity…thus the Trees of Life , based on the Klimt painting, which she had had installed all over Managua at vast expense. They consume an obscene amount of electricity for a country where rolling power cuts are the norm…they have had to be guarded by private security officers…real trees have been cut down to accommodate them…an all too accurate representation of image over action, the very thing with which even veteran Sandinistas reproach the current government.

There might be some residual respect for Ortega…but none for his wife who seems to be preparing her ascent to power with the aid of her armed thugs. 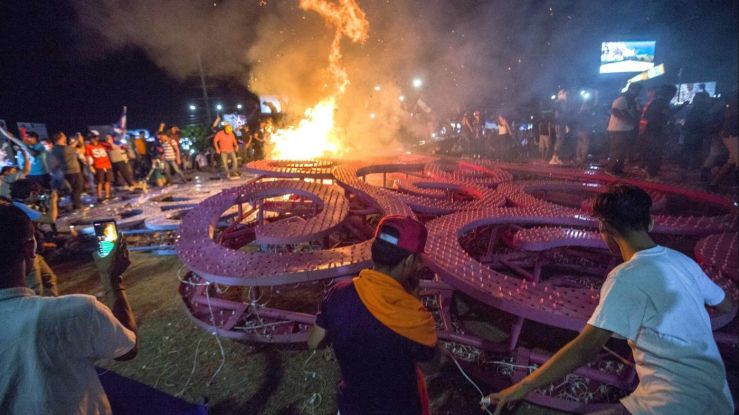 I found it interesting that these were not Trees of Liberty, on the model of the revolutionary American and French  societies, which you might expect from a once revolutionary party.

Too dangerous to plant a Tree of Liberty in Managua? Clearly…it might remind people of the hardships they suffered to bring about the free society of which they were now being deprived…

Not that the Trees of Liberty had had a free pass….

Revolutionary France planted them in cities, towns and villages on the model of the Boston Tree of Liberty made famous  by the reaction to the Stamp Duty Britain wished to impose on its American colonies. They were regarded as national altars, the exemplar of freedom, and attacks on them were severely punished….even to death under the guillotine.

Needless to say, with the advent of Napoleon, followed by the restoration of the Bourbons, the trees had a hard time of it. They were to be destroyed, though in more radical communes cuttings were made to keep the soul of liberty alive…

I suspect that their hold on people was more than just revolutionary fervour. Though decried by the Catholic church…and by the Puritans… the old fertility symbol, the Maypole, still attracted people…probably more for the festivities associated with its erection than for anything else…and the Tree of Liberty gave it life again in a ‘respectable’ form.

Not that it is completely forgotten, even now. Driving through the Correze many years ago  I was astonished to see maypoles in domestic gardens. Wound in tricolour stripes they bore a notice

A homage to the elected councillor…who, no doubt, had been obliged to wet the  whistles of his voters as the pole was installed.

Somehow I cannot see these installed in Managua….

But I can hope that the spirit of those who fought and died under the black and  red flag will triumph again to regain freedom for Nicaragua.

This is Julio on the ‘phone this morning, checking that I had the results of Costa Rica’s Presidential election in which one man called Alvarado, centre left candidate, beat another man called Alvarado, evangelical preacher, standing for ‘family values’, i.e. the missionary position in the dark with a person of the opposite sex, both of whom had preferably tithed to support their local preacher in the luxury to which he woshed to become accustomed.

Armando is a notorious homosexual…well, notorious in his village anyway….but as far as I was aware he stood in no added danger if the evangelical had won, pogroms not being part of his election programme.

‘Ha,’ said Julio ‘Let these demagogues get into power and you’ll have Hitler before you know it!’

Before I left for a trip to Europe which involved almond blossom in Spain,  a non functioning Mithraeum, snow, ice, non delivery of mother’s shopping – twice – catching a chest infection and suffering from hypothermia in Barcelona airport  the thirteen candidates for the Presidency in Costa Rica had been reduced to two after the first round of voting.

Against all expectation, one of the two was Fabricio Alvarado, of the wonderfully named National Restoration Party, who had profited from the declaration of the Inter-American Court of Human Rights that all signatory countries must permit same sex marriage to rise in his wrath and declare his opposition to such a challenge to traditional culture. It was an imposition…it was contrary to Costa Rican customs…next thing you know it would be in vitro fertilisation and homosexuals running rampant in the streets. 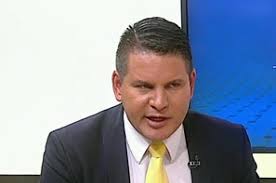 It struck a chord. Previously, despite holding open air prayer meetings all over the country, his share of the vote had been estimated at three percent. After declaring his opposition to same sex marriage it soared into the twenties and permitted him to be one of the two candidates in the run off.

Was the country mad? This was a man who made his name as a happy clappy singer in evangelical circles, who had slid under university rather than through it and whose period in the National Assembly was marked more by his absence than his presence.

And he was standing for the office of President.

He brushed aside claims of his lack of experience…..look at the mess those with experience had made, he said….God would guide him.

What was his attraction…and to whom?

Following the pattern set by the Front National in France and Trump in the U.S.A. he set himself up as the outsider…the man who represented those who felt they were ignored by those who ran the country…mostly in the coastal and frontier areas where infrastructure is poor, educational opportunity inadequate and well paid jobs non existent.

Traditional values were disregarded, undervalued by what was seen as an elite living in and around San Jose…a corrupt elite which had led the country to ruin both morally and economically.

There had already been disquiet in these areas about a new sex education module for high schools which dealt with gender identity, so Fabricio’s reaction to the decision of the Inter American Court fell on fertile ground.

He would be the man to take on the perverted politicians…guided by God and financed by the faithful.

Not only did he reach the run off, but his party acquired fourteen deputies in the new National Assembly, thirteen more than in the current one.

National Restoration was on a roll.

But the roll started to take a downhill trajectory.

The proposed cabinet of ministers were seen to be either useless or implicated in obscure financial affairs.

Fabricio’s pastoral guide announced that the patron of the country…the Black Virgin…was a demon and that the Basilica which housed her shrine at Cartago was a haunt of Satan….which alienated a vast number of potential Roman Catholic voters who would otherwise have supported his views on ‘curing’ homosexuality and all the rest of the baggage… 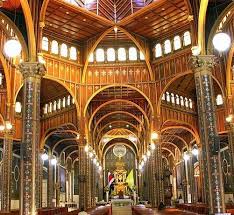 In the televised debates he could not make a reasoned argument…

When he finally produced his manifesto it was only a shortly before  polling day and was a mess of copy and paste from the manifesto of the PLN candidate who did not make the run off.

Still, the polls and the papers had him twelve points ahead of his rival, Carlos Alvarado, of the ruling PAC party. As far as the media were concerned, Carlos had to be defeated by nomatter whom, as PAC had been undermining the power of the monopolists who make Costa Rica such an expensive country in which to live…monopolists who control the press. No way could Carlos beat Fabricio.

But he did. Sixty to forty per cent.

Costa Rica came to its senses.

There was a notion of ‘anyone but Fabricio’ just as in France there was  a notion of ‘anyone but Le Pen’, but a consensus was reached that there had to be an end to the inequalities that produced the Fabricio effect…that the better elements of the political scene had to stop squabbling and start to solve the problems that have been developing over the last twenty years.

But he faces an uphill task, like the current incumbent, President Solis, because PLN and National Restoration hold a majority block in the new National Assembly just as PLN does in the current body.

Cosdta Ricans have to take a further step…to make their representatives accountable. To force them to put country before pelf and party.

If they fail then there will be another four years of stagnation, of small gains, of deterioration of the quality of life of the majority of people.

Fabricio has left a time bomb….it needs to be defused and can only be so by popular pressure.

Still, there must be one group of people who are, whatever their views on same sex marriage, ‘curing’ homosexuals and in vitro fertilisation, very relieved that Fabricio has lost.

The diplomats of Costa Rica.

They will not be faced with explaining away a First Lady who ‘speaks in tongues’.

She is the one on the right as you see it.

Passing the port the wrong way might be overlooked…but speaking in tongues is beyond the pale……..