Before we go any further…..these are calves…agreed? Small, appealing manageable creatures….

My return has not been a resounding success.

It was not a good idea to leave Spain with mother on Sunday, travel all day, settle her in, cook a meal, pack and leave at 2.00 am on Monday for the airport.

London Heathrow Terminal 4 was not a good idea either.
Very few service staff in the forecourse and an insistence that the clients use ‘print it yourself’ check in slips.
By the time I had fathomed where to slide in my passport and which way up and had discovered that to swipe a bank card you need to move it in and out of a slot I was in an ill humour…the situation not improved by the multiplicity of staff within the tape bound snake toward the actual check in who seemed to want to see the already swiped passport, and ask damnfool questions about where exactly I was resident.

It had not been a good idea not to bring sandwiches.
The Caviar House and Prunier stand was just setting up for the day, their staff wearing those absurb black hats that these days denote catering staff whose management has ideas above the quality of their product.
Dining Street resembled a cross between a dilapidated Wimpy and something left over from the Olympics publicity team.
And as for Costa and the poncily named Apostrophe…forget it. One look at the stuff being loaded onto the shelves and the hungriest would renounce eating something that looked as though it had been flung together by primary school children inadequately trained in finger painting.

Not to speak of the prices.
You could easily slim if you had to live in the post security area of Terminal 4.

The flight was fine…if you like being in the middle seat with no way to turn on your reading light when every last idiot in a window seat has pulled down their window blind in order to watch crap on the laughingly called entertainment system.
No other seat with a working reading light available.

Breaking my glasses and losing the important lens was not too hot either.
I had to spend four hours on the connecting flight staring at the map that shows how slowly the plane is approaching the destination and then crowning disaster, picked up the wrong case at the baggage claim.

It was the same colour, it had the same purple through baggage tag….but it was not mine.
A working pair of glasses might have avoided that…

The airline were on the ‘phone as I hit the front door.

I returned, and discovered how easy it would be to blow up the airport.

The airline office is behind the check in desks. Without a question, without control, I toddled in to hand in the bag and to retrieve my own.
Yes, there are security cameras, but there is nothing whatsoever to stop you from dropping into the loo, depositing a bomb in the waste bin and toddling on your merry way again.
Oddly enough, the other party had not claimed the missing case….mine had been discovered forlornly on the caroussel….so goodness only knows what that was about.

I returned home. I had supper. I went to bed.
As I switched on the light there was a noise as if of a herd of elephants bellowing.
Underneath my window.

What the blazes is that?

That reply, so small in itself but so pregnant with meaning.

You remember I told you I’d bought some calves?

Yes, I did remember the project being mentioned.

After a night of bellowing and banging about below, morning brought enlightenment. 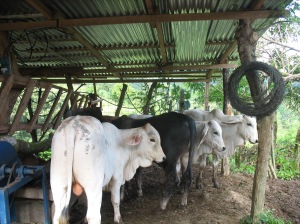 So far one has escaped via the stream, chased the new neighbour’s horse, charged through his corral upsetting the fire over which he was cooking his mid day soup and returned via the drive taking with him a stand of ornamental gingers.

The new neighbour, far from complaining, helped in the recapture.
It brightened up his day apparently as he is currently living in a horsebox having been thrown out by his wife for losing the contents of his lorry while boozing instead of coming straight home from the feria…and lunch at ours was better than lunch at his.

The Men are busy strengthening the pen….and the sheep are adjusting to the new normality.

I’m not sure that I am though perhaps it is as well that I have returned as apparently the neighbour has opened negotiations with a view to moving into our currently unused pig pen as providing better shelter in the rainy season…..