Skip to content
They formed part our historic landscape in all their manifestations and together with water mills fed us and clothed us before we turned to other means to our ends, careless of the balance between pollution and production.
Now that we are reaping the consequences of our lack, first of knowledge and then, unpardonably, of care we are looking back to natural sources of energy: sun, water and wind.

And what do we end up with? These monstrosities. 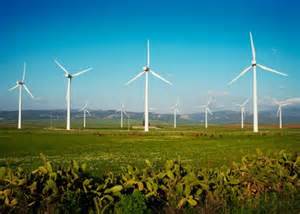 Flying over Spain white rows of the things mark the line of every hilltop…beautiful Lake Nicaragua is desecrated by them…
Wherever they are placed they are aesthetic crimes.

But we can become accustomed to aesthetic crimes….we quite like old mill buildings once it is not our generation feeding the maw of the looms and we can browse arty crafty boutiques run by crafty arty people before stopping for a sustainable if not sustaining lunch.
In time we will be accustomed to wind turbines too.

But why should we be? They are inefficient, their unpredictable output requiring power plants to be on permanent stand by…..and they are a scam in which the taxpayer is scalped to produce private profit.

As may be plain, I am agin them.

They were making their appearance as I was leaving France…and locally a group of farmers seeking to install these horrors on their land were threatening people living in the lotissement downhill of the proposed site with consequences should they protest. Those wind turbines were going in!
Luckily, the lotissement dwellers took umbrage at the bullying.
Now that the French have discovered commuting, the traditional village power brokers don’t have it all their own way any more…..people moving out to live in the country hold down decent, responsible jobs…they don’t have land in the commune…it’s more difficult to threaten them.’
They banded together and all these years down the line they have finally won. Those wind turbines will not be going in.

The resistance to the installation of wind turbines is growing. Especially after the hike in the price of electricity paid by the consumer in order to subsidise them….fifteen percent on your bill in these days of straightened circumstances tends to get your dander up, after all and if that doesn’t rouse the somnolent dander it is guaranteed to spring to life on learning that the very people on the local council voting for wind turbines to be installed are those owning the land where the said installation will take place and for the which installation they will be handsomely paid.

Decentralisation of power, for which France has so often been congratulated, is nothing more than an enlargement of the trough so that more snouts can find fulfilment at the expense of the taxpayer – that rara avis who has less than the tax efficient three children, hasn’t enough money to be able to hide it in investing in fictitious resorts out in the Dom Toms or in three legged racehourses at Chantilly and is not able to reduce his liability by having several publicly funded posts the income from which is counted separately when arriving at his liability to tax.

Decentralisation of power has meant that people making decisions are very close to the action….and that requires an advanced appreciation of ethics – something not necessarily conferred on maires together with the tricolour sash of office.
Usually their activities are greeted with the Gallic shrug of resignation….
What do you expect? Of course he’s going to feather his nest….

Sometimes it goes wrong.
In February 2010 a violent storm hit the Atlantic coast of France. At La Faute sur Mer, in the Vendee, the sea wall gave way and 29 people – mostly elderly – died, drowned in their houses.
Stones were inevitably turned….it appeared that the maire and his deputy had actively pursued development in an area which was known to be prone to flooding.
That the deputy’s son in law was the estate agent pushing the sales.
That it was stipulated that the houses had to be on one floor only…where flood risk regulations demand two floors so that people have a chance to escape the flood waters even if taken by surprise….

After the usual kerfuffles – it was argued that it was the fault of the purchasers for purchasing where they did but that time honoured chestnut did not wash this time…the case came to court and the maire has been sentenced to be jugged for four years. He is horrified, and is, of course, appealing the judgement.

But that he came to court at all marks a change from the virtual immunity of elected officials from prosecution and it is this which is worrying the lobbying organisation representing the promoters of wind turbine installation in France…France Energie Eolienne….which has written to all the Deputies in the National Assembly to warn them of the terrible consequences if the law which governs the behaviour of elected officials is not changed.

It appears that consumer groups have been advising those who resist the installation of wind turbines on how to bring their maire to book….shock, horror, outrage on the part of FEE.
If this goes on, maires will be too frightened of being taken to court to permit more installations.
Something must be done!

Their answer is to relax the law which governs the actions of elected snouts in troughs….so that maires will not be inhibited from setting up wind turbine installations on the farms of their grandmother’s cousin once removed…or even on their own.
Considering what the snouts have managed to do while the current law is in force relaxing it looks to me like a recipe for rampant corruption…

But there is always hope.

Hope that their action in lobbying to free maires from the fear of prosecution might bring about two desirable objectives.

And to take a much closer look at the wind turbine industry…its efficiency, its value for money.
Never mind the eco publicity on recycled loo paper….follow the loot.