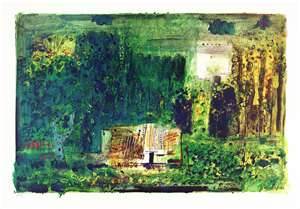 Hello Jean-Yves! What brings you here? I’m in the barn…just a minute while I shut the doors and we’ll have a drink…

No, don’t shut the doors, Victor….it’s about what you’ve got in that barn that I’ve come about.

Yes, I’m trying to do you a good turn….let me see what you’ve got there. Yes, just as I thought!
Victor, you’ll have to get rid of it…put it back where you found it…and quickly.
There’s all hell to pay.
Everyone’s out looking for it and they’ve even taken us off speed traps and breathalysers.

Must be serious then!

Yes, it is!
Apart from you having stolen property in your barn…what the blazes do you want with a bulldozer that size? You haven’t got enough land to make it worthwhile – and how did you get it here from the new bypass anyway?

Ah! Typical!
Us farmers are getting robbed all ways…..diesel syphoned off, animals killed in our own fields, tools stolen, irrigation pipes nicked – even whole crops gone!
Look at that poor guy who had his whole field of garlic nicked….and the forty hectares of grapes that went missing overnight….not to speak of combine harvesters vanishing into thin air!
And where are the Gendarmerie? Breathalysing some poor sod who’s been out drowning his sorrows!

Well it’s not my fault….only a few more years to the pension, thank goodness.
It’s not what I joined for I can tell you…

No, I know Jean-Yves.
When you started there were still bars in your stations – and you were a hell of a lot nicer for it! I reckon that the rot started when they closed down them down.
You turned nasty about then…applying the law to people you knew…
Still, what I mean is that us farmers can have our stuff nicked left, right and centre…but let some big roadworks contractor miss his bulldozer – you’d think he’d got enough, wouldn’t you? – you’re all on red alert!
No wonder we’ll all be voting Le Pen in the elections!

That’s as maybe…but I can tell you that a big firm like Crapule gets a lot more attention in high places than you lot. Might be different if you were cereal boys…in the big league…but you’re not!
The firm thought the ‘dozer had been whipped off to Germany….like a lot of other stuff. You boys are lucky you’re not nearer the frontier.

What do you mean?

Well, they worked out they didn’t have to have a war to get what they wanted this time….they thought up the E.U.
See, in the war they had to go round requisitioning…this way government – our government – does it for them.
They get cheap veg and flog expensive cars.
Bit like Vichy, really, but more efficient. Very hot on efficiency the Germans…

Come off it Victor! You’re not telling me the Germans are using the E.U. to nick combine harvesters and fields of garlic…

No, but they run the show, don’t they! Remember when Hollande got in and what he was going to say to Merkel?
Turned out to be ‘Jawohl’, didn’t it…
No, the E.U. lets these crooks from Transylvania in and they nick the stuff, take it to Germany and the Germans get it on the cheap…
Clever buggers, like I said.

Never mind all that! You’ll have to get it back there…or dump it somewhere…and sharpish!

Well, we’ve finished with it now anyway, so I’ll get Laurent to run it into Ste. Conasse tonight, dump it round the back where it’s dark. Just make sure you’re not out breathalysing between here and there.

No, all right…but who is ‘we’? You and Laurent?

No! There’s me, of course, and Jean-Antoine and Popaul…here, you’re not taking notes!

No, just interested to know what’s going on. That’s what policing used to be about…
So what the blazes were you three geriatrics up to? Put together you don’t have enough land to make that ‘dozer worthwhile…

That’s where you’re wrong!
It’s the eco tax…you know, the one on lorries that comes in in January. Going to be taxed by the lorry…tollgates going up all over the main roads…
Gerard over at the roads department in Benitierville put us wise! There’s going to be one between us and the abattoir! It’s only down the road…but we’ll have to pay as if we’d been coming from Normandy!

Well you weren’t thinking of using the ‘dozer to knock the tollgate down, were you?

No! We might be old but we’re not stupid!
We had a word with Olivier down at the abattoir and he reckons that we can get in on the back road from St. Ragondin round by les Deux Biscouilles without any problem.

But how are you going to get to St. Ragondin? You’ve still got the main road to deal with.

Ah. that’s why we wanted the bulldozer.
We’ve made a road across our fields to link up with the footpath that brings us out just this side of the village….where the old railway line used to be. A bit of hardcore in bad weather and we’re sorted.
So they can stuff their tollgate…we won’t be paying!
Eco this, eco that….just another word for tax!
It’s bad enough with their blasted windmills…electricity bill up through the roof…but a tax on going a few kilometres is a step too far!

Well, just get rid of it Victor…tonight! You don’t want anyone else knowing you’ve got it…the adjutant is up the wall!

Hang on a minute, how did you know to come round here?

Well, it couldn’t have been the manouches….they were having a face off with our boys with chainsaws at the campsite that night…..so the only other alternative was a totally irresponsible idiot…and that’s when I thought of you!

That evening, at the gendarmerie station, the adjutant answers the ‘phone.

Here, says a voice, I reckon you should know….

Well, that windfarm at the back of Ste. Conasse…someone’s driven a bulldozer in there and there’s a hell of a mess….metal all over the place and the gyppos are carting it off by the truckload…….

The illustration is ‘Mosnac, Dordogne’ by John Piper.