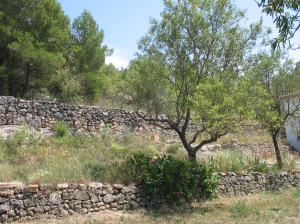 Here being a hamlet in the hills behind Castellon de la Plana in Spain, a place well off the tourist route and likely to remain so as its airport, built at a cost of some 150 million Euros of public money and declared open in 2011 has yet to see a commercial ‘plane touch down on its runway.
Just as well in some ways as in 2012 the runway was declared too narrow for any hypothetical ‘plane to turn round.

So I didn’t get here by ‘plane.

Nor by train. I had wanted to, but perusal of what French railways laughingly call online timetables meant that all roads, or tracks, led to Paris.
You want to go cross country and pick up the Paris Barcelona service at some intermediate point?
Or pick up the service from Montpellier to the south of Spain?
Forget it.
The gloomy minds of the SNCF nerds responsible for the online timetables can only provide you with main line services or local ones. Very local ones.
And when you’ve spent three hours on a guessing game as to which very local timetable is the neighbour of the last very local timetable you consulted you find that even if you were to succeed in combining them in an infernal sausage link you inevitably end up in Narbonne at some unearthly hour with the prospect of sleeping on the station until the departure of the morning express for Spain.
Bring back the Thomas Cook European railway timetable…its disappearance another blow for civilisation as we knew it.

So, I booked a Eurolines coach for a seventeen hour journey to Castellon.
After the last encounter with Eurolines, notable for standing in a wind tunnel outside Lille station at five o’clock on a winter morning you would think I would have learned my lesson…but I persuaded myself that
A. Despite the violent overnight thunderstorms it was now summer.
B. There were no changes of coach to be made.
and
C. It was over one hundred Euros cheaper than taking the train.

Arriving at Poitiers from my one horse dorp on the bus which has replaced the train in rural areas I found that the station area resembled a Cecil B. de Mille crowd scene: the overnight storms had brought down trees which in their turn had brought down power lines and blocked the tracks.
Nothing had stirred since the early morning.

I had a seat to myself as far as Toulouse but the next eleven hours were spent with limited legroom, the journey broken up by the usual loo stops – the last of these being, by unlucky chance, only forty kilometres from my destination.
I staggered off the coach at Castellon and headed for the hotel across the road.
An inexpensive room with wifi and, bliss, a full size bath. I soaked there for ages before going to bed and sleeping for six straight hours.
I am not as young as I was.

And then to the house.
The gentleman holding the keys had come into town to collect me – the only bus being late in the afternoon – and we drove out through the remains of a once booming ceramic tile industry…derelict sites lying back from the road….into a countryside of scrub, olives and almonds the road rising and turning before dropping down into a broad valley surrounded by mountains.

A couple of villages, stony tracks leading off the road itself, pig farms, silos poking above the trees like cold war missiles, then turning off on a track between trees and fields of tomatoes…not staked, but sprawling over the golden ground…and with a final heave up the slope we are there. 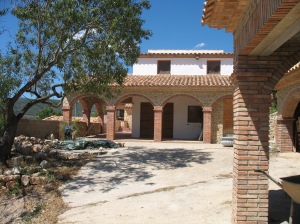 At the house I first saw in photographs over a year ago and last saw in the flesh in winter.

Our pied a terre in Europe…..

We’re out of France!