Summer is indeed upon us: we might lack the cuckoo in these tropical climes but we certainly have the full range of farmyard animals referred to in the lyrics about us.

And, especially, we have Monty. 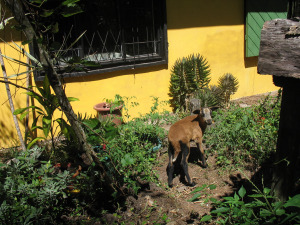 From this little thing, rejected by his mother, he has now, some two years later, turned into this:

Very much the patriarch with his family about him.

He took his time making the transition.

For a long time he hung about near the house doing guard sheep duties:

But more and more he was drawn to the flock whence he came until he finally decided to take up residence and dominate them rather than us.

He has taken on the typical attitude of a ram…if it is in the way, butt it, if it isn’t butt it anyway… but still and always cuddles up to Leo, mild as milk.

Clearly, he does not forget who saved him.

Climate change is with us: the pastures are drying out early in the unseasonable heat, so thank goodness that we laid a lot of ground down to cameroun – a nutritious fodder grass – a few years ago  to supplement the grazing which means that the ewes maintain vigour and can support their lambs, unlike Monty’s mother who had arrived half starved.

We were supposed to be at the altitude limit for coconuts to fruit…but this year, not content with fruiting, they have started to germinate:

Goodness only knows what changes we will see in the future…but, for the moment, as this song from the late fifties says:

31 thoughts on “Summer is icumen in…”